Kidney stone disease is one of the most common urological disease. It is more frequent in males, but it is not uncommon in females either. It is caused by precipitation and crystallization of certain chemicals found in the urine in a dissolved form. The formation of kidney stones is facilitated by low fluid intake, too high calcium content in the urine, congenital malformations related to the kidneys and the ureter, inflammatory conditions and genetic predisposition. Kidney stones range from 1-2 mm to several centimeters in size.

A kidney stone, if it does not cause blockage, may remain “dormant” and may be asymptomatic. If, however, such a “calm stone” dislodges and blocks the passage of urine formed in the kidneys, it may cause rather intense symptoms.

Most typical symptoms include:

* lower back pain with a sudden onset, which may radiate into the lower abdomen

* blood in the urine

Nephrolithiasis can easily be diagnosed with the help of ultrasound and X-ray imaging.

Stones smaller than 0.5 cm may pass spontaneously; however, larger ones require medical treatment. Today, it is possible to treat the stones stuck in the kidneys or ureters with  extracorporeal shock wave lithotripsy (ESWL treatment), which means crushing the stones into tiny pieces without surgery. After the treatment, the tiny pieces that are often as small as grains of sand will eventually pass on their own. The treatment lasts for about 45 minutes, during which the patient lies on a bed, and shock waves are targeted at the kidney stone. The frequent pressure waves of adaptable strength penetrate the tissues of the body and crush the stone into “stone dust”. After treatment, the patients are given instructions and can usually return home if they do not have any complaints.

In case the stone cannot be treated by shock wave therapy, kidney stone surgery is indicated. Nowadays, it does not require a large incision. A small incision the size of a finger breadth is enough (during a so-called endoscopic procedure). An open surgery is needed only very rarely. Endoscopic surgery requires hospitalization for a couple of days; however, its advantage is that the stone is removed in one piece during the surgery.

If one has kidney gravel or has had lithotripsy, it might be useful to use preparations with diuretic and antispasmodic effect to promote the passage of tiny parts and to prevent kidney stones.

Kidney spasms are never pleasant. This is well known by anyone who has already experienced kidney spasms. They are typically caused by kidney stones leaving the kidneys or moving.

Why kidney stones develop and why only some people develop kidney stones is still not clearly understood. Nevertheless, it is clear that whatever type the kidney stone it is (their chemical composition varies), its development is facilitated by concentrated urine, in which minerals become precipitated. Therefore, it is important to consume fluid in appropriate amounts, which dilutes urine.

The most common type of kidney stones are the ones containing calcium oxalate. To prevent calcium oxalate from forming crystals that could clump together to build kidney stones, it is essential to decrease the consumption of foods with a high calcium content (cheese, chocolate, cocoa, etc.). The sufficient intake of magnesium and vitamin B6 is also important. The other most common type of kidney stone is uric acid stone, the formation of which is enhanced by the consumption of too much protein, especially the types found in game meat. Therefore, those who have a predisposition to this disease (gout) are recommended to avoid eating “red meat” and to consume vegetables instead.

Kidney stones do not develop from one day to the next. First tiny crystals precipitate in the urine, which clump together and eventually form kidney stones. Urinary tract infection may also contribute to the formation of kidney gravel and stones. For this reason, it is very important to “flush” the kidneys as intensively as possible by consuming a lot of fluid. It may often be useful to consume natural products with diuretic and antiseptic effect like goldenrod extract or herbal teas.

Magnegold tablets are tablets developed by Hungarian doctors and are manufactured in a factory under close supervision. They contain magnesium, vitamin B6 and Goldenrod extract; thus they help prevent the formation of kidney gravel and promote the passage of the possibly formed gravel at the same time.

Our product at a promotional price: 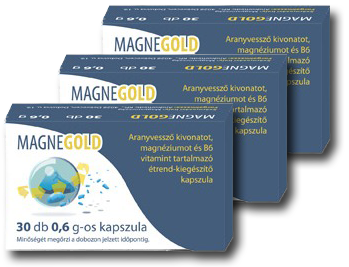 FREE DELIVERY
(only in Hungary)

One tablet of Magnegold contains:

The quality and amount of the ingredients is guaranteed by the manufacturer.